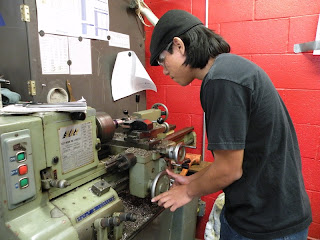 Some kids from Monrovia High School have been spotted at the shop recently working on their vehicle for the Shell Eco-Marathon.  The goal was to create a vehicle using a weed whacker engine to drive on a track as efficiently as possible.  This unique project was entirely student-designed, with the adults associated with the project acting only as assistants.  They came to us needing some fabrication.  Arclight helped them build frame components and welded them together.  Their vehicle had an interesting drive system, using a bicycle cassette mounted directly to the small gasoline engine, driving a chain connected to the wheels.

We sat down together, discussed their designs and started cranking handles.  These kids have never operated shop equipment bigger than a drill press, so after a quick demonstration they were making chips on their own.  After a few hours of work, we had some functional parts.  An interesting part of their experience was speaking to the kids about awareness of our MacGyver'd design, which could very well fail catastrophically.  While no one was injured, there were definitely some terminal illnesses with their design during the testing phase. 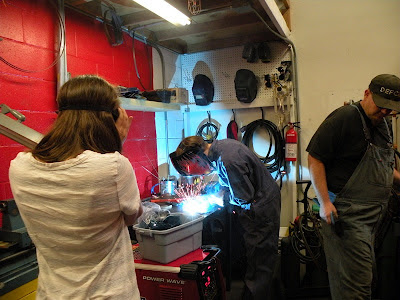 After going back to the drawing board, the kids returned with a desperate need to redesign, with two weeks to go until the competition.  We discussed the failure mode of their design, realizing that we had not taken into account the accuracy needed to mount the bicycle cassette directly to the weed whacker output shaft.  The easy solution was to scrap the entire drivetrain (along with all of their hard work!) and go to an electric design, avoiding all the messy steampunk power transmission parts.  Sourcing a small electric motor from Harald's Meatspin Rock Tumbler, they quickly redesigned a successful drivetrain, and didn't even have to leave the building for the components.
by machinist