On a whim, I decided to build a Standing Wave Flame Tube, also known as a Ruben's Tube.
I used 1.55m of 4" diameter ABS plastic pipe, capped on one end with a rubber plug and fitted with a machined plastic adapter to accept a speaker on the other. Our first attempt (using a 4" speaker and a PA amplifier) resulted in accidentally blowing out the speaker, so we decided to try a set of Dell PC speakers. This worked out pretty well, as we could hear the sound in addition to seeing it. 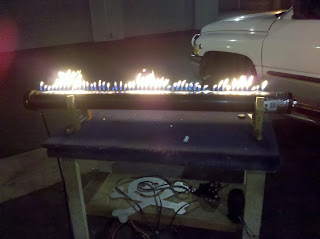 Here is it with a pure 252Hz source. Note the nodes and anti-nodes. We used 55x #50 holes, spaced at 1" apart. The top of the tube is covered with Aluminized tape to keep the plastic from melting. Note that this thing flows quite a bit of gas - from what I've read, the total flow rate is determined by the Bernouli principal, and stays at the same average regardless of what is going on with the standing waves.

It appears that it was able to flow several liters per minute, as it had no problem freezing a small 4x16" propane bottle.

The Windows function generator software we used was this:

The tube responds nicely to music as well, but it is very sensitive to any kind of wind.

A future experiment will be to measure the speed of sound of the flammable gas. 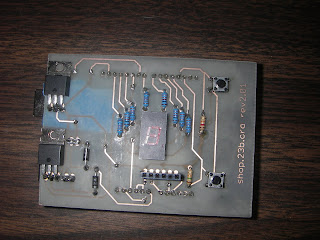 After trying out a new do-it-yourself PCB fabrication process, we finally have success with the Arduino shield I had been working on. This prototype has:

This will be the new test platform for programmed operation of motors, high-powered LEDs, etc.


Arclight
by Arclight No comments: