Because the original Tested video had no details of what was built besides what was shown/talked about in the video, I had a few questions about what exactly was used.

One of the first questions I had when I saw the video was what size box was that and what LED strips did they use.  There are tons of different types of RGB LED strips out there of varying densities and control types, and I have played with a few of them.  So I went about figuring out what strips they used for the box

The first step is to determine how big to make the box. Taking a look at the finished box in the video I can see the box is square, and it goes from about the armpit to mid/lower belly of the hosts. 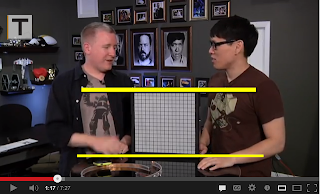 Judging by this dimension, and estimating based on the humans I have available. I would say this about 12 inches. This sounds good to me if I am going to apply some DFM principles in this build- lots of raw materials come in multiples of 12 inches (wood, acrylic sheets, lighting diffusion paper etc) so making this box 12" square should make acquiring materials easier, and with less wasted scrap in the end.

Now, to determine what RGB LED strips to use. Adafruit sells many different options available, and sells LED strips at a decent price products are shipped from the US. They also provide very nice product pages with good information and links to good sample code. This isn't about recommending one vendor vs. another, but they are a good starting point with a good reputation, so they are worth consideration.

The 60 LEDs per pixel and 30 LEDs per pixel "neopixel" strips look nice, but they are not something Ican use. I want to use a RaspberryPi to control these strips, and according to Adafruit's product page:

The controller chip ... protocol used is very very timing-specific and can only be controlled by microcontrollers with highly repeatable 100nS timing precision ... t it will not work with the Raspberry Pi


Well, there goes that option, so now I move on to LED strips which are controlled by external (not on LED) controllers, such as the HL1606/LPD8806/WS2801  as I see on the 32 LEDs per pixel strips. I used a strip like this on the Mobile Club tabletop and strips like these are very common and easy to find on hobbyist sites such as Sparkfun  and Adafruit, as well as ebay and alibaba/aliexpress. There are many different types of strips, but the main variations are number of LEDs per meter, and the level of addressablilty for the LEDs on the strip (each LED can be a different color, a certain amount of LEDs have to the same color, or all LEDs have to be the same color).  For this project, I will need to make sure I can address each single pixel and make it a different color.  You will see LEDs that are "3528" and "5050" The 5050's are brighter. Look for those.


A strip with 60 LEDs per meterwould be an LED every 0.01667 meters, this translates to every 0.65" this is close, but not perfect, and I would need to find a source for individually addressable

But, in looking around online I found LED strips at 52 LEDs per meter- that is an LED ever 0.0192 meters, which is about 0.75" - Perfect! These strips use the LPD8806 controller which will allow us to address each LED individually. I found these strips by search for LPD8806 LED strip and found good sources for these on both alibaba/aliexpress and ebay. In the end, I chose to purchase from an ebay seller based in the US, so I could get my LEDs delivered fast and get a start on the project by the weekend.

In comparing the ebay product shot with the strips shown in the video, they look identical (note the shot in the video is missing the silicone jacket used for waterproofing. 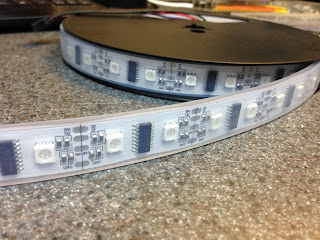 So, it looks like I found the strips they used in the video, and the numbers/sizing adds up, so I feel confident going forward with these parts.

The RaspberryPi and LED strips have been ordered and I am waiting for them to be deliveryed. The next steps are to look into how deep the box should be and how to best diffuse the light.