It's summertime and 23b Shop is in full-swing.  Fully-recovered and detoxed from Layer One, ID4con only a day away, and DEFCON on the horizon, there's lots of action happening around the shop.

Our ILCO key-making machine has been in need of some serious attention for a while.  An old cast iron bearing was worn out and needed a sleeve, and a clamp was missing.  These clamps hold down the key to be traced and the blank to be copied.

The key machine is a model of an unknown vintage, but judging by the patina and wear on the parts, it's easily 50 years old.  The same model is still produced ( >$600!), so we figured it would be worth repairing our machine.  The bearing was re-sleeved with a brass bushing, on our Smithy mill a few months ago, and the spindle was removed, built up with bronze brazing rod, then turned back down to the proper diameter of the bushing.  After a few failed attempts at manufacturing the clamps on the anemic Smithy, the project was shelved until the Bridgeport received a proper shake-down.

This project tested the accuracy of our Bridgeport and the lathe, both of which turned out to have a repeatability of .001", as accurate as our measurement equipment is.  These parts are so accurate that they're interchangeable with one another.  Not too shabby, considering we were using a machine from 1955 with no digital readouts (hint: BUY US SOME DIGITAL READOUTS so we can have better shop classes).

We've tried doing some engine turning in the past few weeks, as well.  This is a decorative surface finish applied to metals.  Surprisingly, this is skillful technique which doesn't have too many resources available on how to actually produce the finish.  After some research and practice, here are a few of the attempts at the technique.  The bicycle crank to the left was buffed out with Scotch-Brite to a smooth finish, and then subjected to engine turning with a stick of rubberized abrasive (Cratex) in the mill.  The results are adequate, and the finish maintains its luster nicely even after months of exposure to the elements and a greasy bike chain.

Next is a timing chain cover from a Yamaha Virago.  This little piece was one of my inspirations for coming to 23b in the first place.  Several years ago, I was restoring this motorcycle, and realized that this part would look fantastic with a nice surface finish.  I took it to work, polished it on a buffing wheel, and then encased it in wax to protect the finish for future use. At the time, I was working in a machine shop that had very strict rules forbidding the use of shop equipment for personal projects, those draconian bastards.   Frustrated with my lack of access to equipment, this was put on a shelf and forgotten. 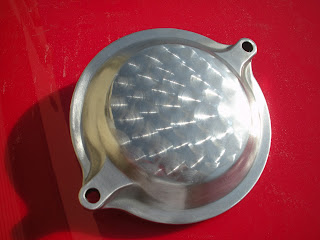 Fast forward a few years, and after cleaning up some boxes in my garage, I came across this piece, still encased in wax.  "Oh boy, now that I have a mill to use, why not?"  Off to the mill we went with years of daydreaming about the process, finally able to be put down on a physical part.  The basics of the technique are simple, these marks are spaced .200" apart with a .100"  vertical offset for each horizontal row.  I've used a wire-wrapped stainless steel brush as well, but  prefer Cratex for its quick cutting action under light pressure.  I'm happy with the results, although lots of practice is definitely warranted.

Lately, we've taken on a few commissioned projects.
This was a project spotted by Arclight on the hackerspaces.org mailing list.  We were asked to modify a waffle iron to say "FAIL" for the DEFCON fail panel this year.  After speaking with the project's commissioner for a grand total of 5 minutes, we found a suitable vintage waffle iron the very next day and completed the project.  See for yourself here, or at DEFCON this month.
Not only are they tasty, the machining turned out unexpectedly well also.  The irons might benefit from additional modification to the "F" and the "L" to make them appear more legibly, but the project is complete to the owner's satisfaction.
by machinist