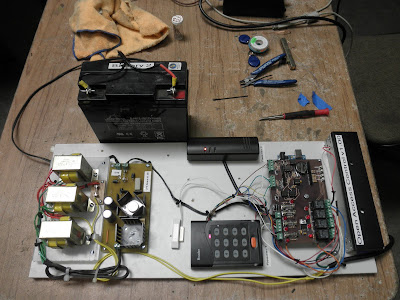 Open Access Control v1.00 system prototype
The Open Access Control system is an electronic alarm and door access system currently in development by Arclight at the 23b Shop. It is open-source and open-hardware, meaning you can get in on the fun and build one yourself.

It is currently being tested for duty as a burglar alarm, door chime, and people tracking system. It logs door access data in syslog format, sends the data via ethernet, and has on-board memory as well for data, command, and user storage. Its real-time clock ensures accurate data logs.

A numeric keypad is attached for entering commands -- for example, make the door open , set to chime on open, stay unlocked for x minutes, lock and allow exit only, deny access to a user, add a user, learn an RFID fob, and so forth. More keypads can be added.

Inexpensive RFID readers allow the system to be deployed without compromising the building's doors, windows, or walls to mount a keypad at the entrance, though this could be done as well.

The strike is a standard electromagnetic building strike; there's no sense messing with such a great and overbuilt piece of hardware. 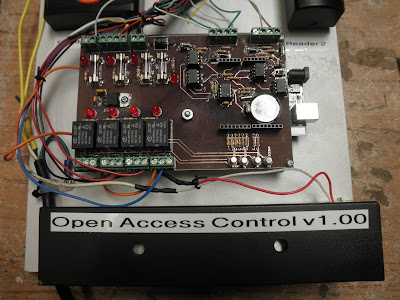 Homebrewed circuit boards allow fast prototyping
The system is built around an Arduino Duemilanova board with an Ethernet shield and custom hardware for the in/out devices. The boards were designed and built at the shop. Laser-printed PCB images and Fab-In-A-Box transfer resists were used to generate prototypes quickly and easily. An inexpensive ID card laminator applied the resists to the board material. A fast accurate etch was obtained by wiping ferric chloride onto the prepared board, which was a novel method that seemed to work more quickly than tank etching with the same chemical, with much less cleanup and chems used. 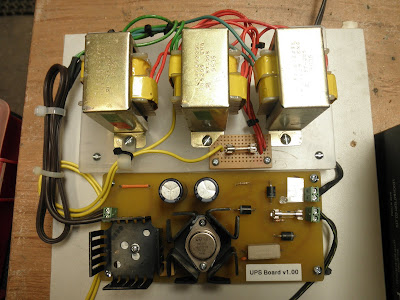 The power supply board
Users can build their own unit from scratch, or possibly obtain partial, full, or assembled kits by contacting the shop.

Users would be able to write code to support other functions of their own devising, like releasing poison gas, activating lasers or tranquilizer dart projectors. Of particular interest are the 'talking sentry', 'MOTD', and time-aware Mini-Bake Oven modules, all in various stages of development.
by danozano