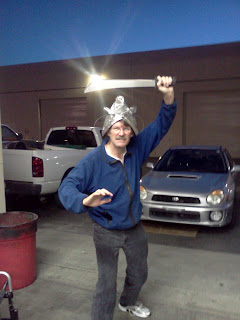 PHOTO: One advanced hybrid component of the 23b Shop Automated Defensive System Project, wielding one of the numerous razor-sharp implements available at all times for ready brandishing.  (Note his unusual inward-facing stance, which indicates that he is currently protecting the outside world from the release of shop inhabitants.)


(Ed. note: Apologies if the tech level is a little higher than we normally present in our "recent shop events" postings, but this was an in-depth investigation and we have a lot of useful research findings. -Dano)

The stylish headgear in this photo is much more than it appears at first glance.  Made by hand from proprietary .003" NASA FOIL in 304 stainless steel, this imposing piece of modern psychic armor is folded from a single, geometrically perfect, seamless square using a fusion of ancient Origami techniques and sculptural pinch folding.  No cutting or other modifications to the original square except for folding were allowed, to prevent potential gaps in cerebral coverage.

This headgear shields the user not only from dangerous inbound mind scans and gamma field mind control rays so prevalent in modern urban areas, but also presents passive interference to unwanted thoughts and internal influences by virtue of finite subharmonic design principles used in the dome shaping.

The unique microcorrugations were pressed into the material at manufacturing time. They are distributed in a bisymmetrical, isometric Leyden lattice of approximately 4.1mm granularity per current research in passive homomorphous brain waveguides, and have been statistically useful in our recent research on the influence of user thought patterns.  In this case, we are seeing the subject's normally fierce demeanor attenuated (albeit only slightly, at an estimated level of Cb=0.031, in the moment of this photo) via implantation of hybridized kitten-based thoughtform images.

As measured by the diminishing population of acceptable subjects to be found in the shop's dumpsters and surrounding abandoned areas, our old invasive "electrode twiddling" methods didn't allow us to keep subjects functional for long.  It's not like you've burned out a 15 amp car fuse; we're hard pressed just to pay the B-waste fee to recycle the burned out minds of unsuccessful subjects. Even despite these troubled times, our local scrap scavengers are not likely to pick up our old test subjects, so they pile up outside, causing unwanted questions and attention.

Control of the autonomic functions of the subject can be instigated by uptake inhibition of sardon flow, as has been discussed exhaustively in the hackerspace community. (Search it yourself, i'm not going to waste space with links for something so easy to find).  However, this is the first time we have had such dramatic success with noninvasive procedures.

The helical cornuvortices (the "horns" present near the lateral forebrain) are shown to be effective in damping the sardon flow from the pituitary region via the special focus chevron in the reverse Brazilian style frontpiece. This is key. The sardon damping pattern is further shaped via the focused deep-channel tuning antennas, visible as tuned wire arcs around the sides and lower portion of the headgear. What a vast, vast improvement we've seen over the old style "tinfoil hats", with their expensive and fiddly platimum foil probes inserted directly into the area surrounding the pituitary gland!

We're glad to avoid the liability and mess in this kind of research, not to mention that our bill for hydrogen peroxide to clean up the implant area of the shop was getting to be more than the cost of electricity for running the Imbridge field generator to quiet down the subjects in the cage area.

Waveguide research of the last 40 years obviously figured prominently into this design, and we can proudly claim that we are on the forefront, nay the bleeding edge, of cornuvortex research here at the 23b Shop.  We are also proud that we have lost 7% fewer research participants to gibbering madness in 2012-13 over our previous research years!

Build time was approximately two of your Earth hours. By the April potluck, we are hoping to have Arduino-based will-damping implemented in the cerebral stack.

- Charlieplexing-- can we control multiple areas of the brain with fewer pins?

- The dongle controller has been suspended for now.

Thanks to the Rice Underground Walk/Swim Team and Go-fast Institute for their invaluable assistance in conducting this exciting and informative research. We couldn't do it without the support and inspiration of our many colleagues, materials procurers, and affiliated research groups.