So a while back, I got a Sturmey Archer XL-FDD hub with a dynamo with a listed output of 6 VAC at 500 mA (for 3 watts of power).  I was eyeballing this unit for quite some time because of the huge drum brake incorporated in the unit.  Once it arrived, I was puzzled to find that there was no instructions inside the box whatsoever.  A brief email to Sturmey Archer yeilded the response, "Youre on your own, kid!"  Cool.
I opened up the dynamo side of the hub looking for a zener diode to clip, which would de-limit the output of the dynamo.  The output of a dyno hub is typically regulated at the above specs so it wont overpower an old filament bulb.  Since I have something a little more powerful in mind, like some power LEDs, it would be useful to bump up the output and rectify the current.  I was suspicious that half of the wave was being clipped, as the light just didn't seem quite as bright.
So once I hook a multimeter up to it, something suprising showed up.  It turns out the specs are a lie!  In the parking lot here I was able to acheive 14VAC at about 20 mph.  Okay, that saves me one step and some trouble.
So the light I am using is a triple LED mounted in an MR16 housing (the kind found in most track lighting as a halogen bulb) with a rating of 12V AC/DC @ 7 watts.  Two years ago it cost me about $20.  Hooking it up to a power supply at 12V reads 360mA, or ~4.5 W.  There is obviously some internal regulation happening inside the housing, and a quick inspection confirmed a SMT LED driver in the case.
I had the lamp in a housing using it as room lighting beforehand, and it was very bright.  Early in the morning when I had the light connected directly to the dynamo, it reached peak brightness at about 15 MPH.  I was not satisfied with the light output under AC current, which is what led me to build the bridge rectifier.
In the first iteration as a pure bridge rectifier, the output was ~16V. Cool!  Adding some 1000mF electrolytic caps to the mix pushed the voltage up over 20.  Im not entirely sure that would be bad for the LED, but I'd rather not take the chance.  I found a suitable voltage regulator and after installing it at, now the hub seems to be stable at 12.2V
I tried a couple different arrangements of Caps (series, parallel, series and parallel, before and after the regulator).  Guessing, I settled on two in parallel after the regulator so I dont push the specs on the caps, which are rated for 25V.  I'll let you know the subjective results tonight once it gets dark.
Hub dynamo regulation circuit ideas 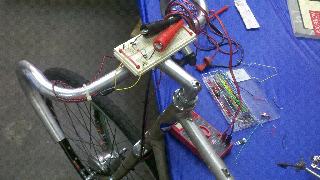